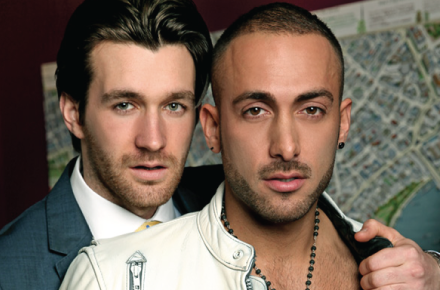 Check out these pics from Episode 1 of Men At Play’s “Diary of a Fox” series featuring Woody Fox. For this scene Woody’s teaming up with the hot Riley Coxx. Men At Play writes, “Diary of a Fox is the first in a series of scenarios depicting the sexual encounters of Woody Fox, the self assured, slick suited estate agent. In this, the first episode Woody invites Riley Cox, young stud in his leather jacket, back to Woody’s office after the closing. Riley is really turned on by the whole situation and to make the role play a bit more real he asks Woody to sit just where he would when he’s working.” You can see a NSFW preview clip here. Some of the images in today’s gallery are NSFW and intended for those 18 years and older. You can follow Woody on Twitter @woody_fox and Riley @Riley_coxx.

For a few more photos check out The Man Crush Tumblr.