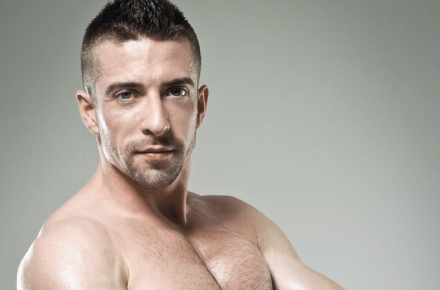 Ok, so I crush on a lot of men from the adult entertainment realm and pretty much always say the same thing but for real, it applies to today’s featured crush, too! I’m talking about Scott Hunter who was one of the up and cummin’ porn models last year. He shows no signs of slowing down in 2013. He’s already filmed scenes for Men At Play, Titan Men and Colt Studios and that’s just a sampling of the studios he’s shot scenes for. According to his profile at Men At Play he’s from Chester in the UK, 32 years old, muscular, sexually passive, 5’10” tall with a 7 inch cock. Check out this awesome interview he did with Queer Click this year. You can stay up to date on Scott’s career and latest videos and photos by visiting his website www.scott-hunter.com/home and follow him on Twitter @ScottHunterXXX. Some of the images in today’s gallery are NSFW and intended for those 18 years or older. Photos in today’s gallery include shots by Simon Barnes, Pierre-Yves Monnerville, Colt Studios and Titan Men.