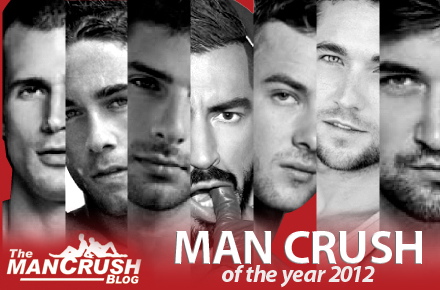 2012 has been a big year for The Man Crush Blog with an increasing readership, more hot men than you can handle and an endless supply of eye candy. Any man featured on this blog is crush worthy and has what it takes to be a Man Crush of the Day but only one has what it takes to be crowned the Man Crush of the Year for 2012. Since I’ve chosen every man featured on this blog this year I’m leaving the vote in the hands of those who’ve made this blog successful-you the readers!

Here’s how it works: for the next two weeks you will have the chance to vote between 14 men, all of them having attracted a couple thousand views each over the course of 2012. You get one (1) vote each round. During the week of December 17, you will have your chance to vote for the winner of the two rounds, the winner that will be crowned the Man Crush of the Year for 2012. The winner of this competition will get a free, prominent banner ad for a year that will link to his website and constant promotion by The Man Crush Blog throughout 2013.

Voting for round one ends Sunday, December 9 at 11:59pm EST.

UPDATE: Colby Melvin has won round 1 of Man Crush of the Year 2012! You’ll have a chance vote for his competition in the final round beginning Monday, December 10 at 8:30pm EST.