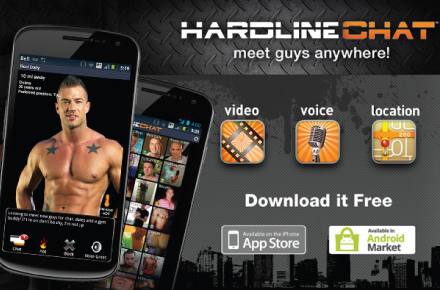 I don’t have to ask whether readers of The Man Crush Blog are fans of the studs at Next Door Studios. I’ve gotten word that there’s a big live video, voice and text chat event happening March 6, 2012 from 8-10 PM PST. The Next Door Studios guys taking part are Cody Cummings, Austin Wilde, Marcus Mojo, Rod Daily and Samuel O’Toole. During this event you’ll be able to share pics and chat with these men using the app’s voice, text and video features. All you will need to do is download the free Hardline Chat app onto your iPhone, Android, iPad or iTouch.

For those unfamiliar with Hardline Chat, it’s a free mobile app (re-iterating the free is always nice). It lets you use voice clips and greeting to interact with other users, uses GPS to help track down other men/users near you and has reportedly added over 20,000 users in the past month alone. Why not add this app to your gay social media arsenal? Apple users can find the app in the App store (http://bit.ly/wo2Qbh) while Droid users can download it in the Android marketplace (http://bit.ly/x1LThk).

A full press-release for the event can be viewed here. You can follow Hardline Chat on Twitter @Hardline_Chat or visit its website www.hardlinechat.com for more information.

It Gets Better: It’s All About You, Not About Them