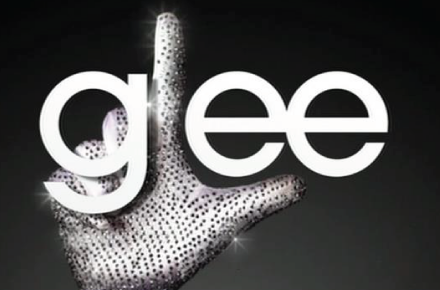 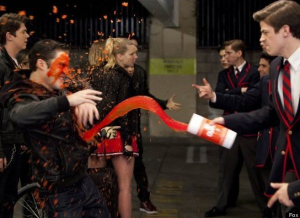 On January 31, 2012, Glee will be unleashing its third big tribute episode upon the world. They’ve taken on the music of Madonna, Britney and (unofficially) Katy Perry and Lady Gaga. So now they’re dedicating an entire episode to Michael Jackson. Now, some may recall that Glee’s already taken on MJ’s music–last year post Super Bowl there was the big “Thriller/Heads Will Roll” mashup and earlier this season the cast took on “Man in the Mirror,” “ABC” and “Control” (that that was by the other popular Jackson in the music industry). Now the cast is taking on ten of Michael Jackson’s songs in one episode titled “Michael.” Here’s my take on the tracks.

Track-by-Track
“Black or White” keeps the original early ’90s vibe of the song, making it sound pop and a bit dated, but fun. There’s the usual Glee spin on the track: Artie does his rapping, the chorus is harmonized but otherwise they stick close to the original. Sure, it’s a bit karaoke but this particular track is still fun and lively. “Human Nature” features more singing and is a bit stripped down, acoustic unlike some of the chosen tracks for this release. While it’s not terribly interesting, it’s nice to hear the Glee cast focus on singing rather than getting lost in an over-produced track where they’re lost in the music (as it happens a lot these days). “Smooth Criminal” is a Santana and Sebastien duet. Now, these two characters are two of the most feisty in the whole show and yet this song feels almost too stripped down and basic. No fireworks, no bitchy zest, it’s just an odd performance overall.

“Scream” is an Artie/Mike Chang song. Now, the original track by Michael and Janet was definitely a music throw-down. You’ll remember Janet and Michael getting all fierce and singing with tons of anger and emotion. I just didn’t get that from this performance. It’s just Artie doing his usual impression of singing with a little attitude. I’m sure, with this being a Artie/Chang collaboration that it’s visually going to be more captivating than it is vocally. “Never Can Say Goodbye” is a retro track featuring Quinn. The laidback, old school sound is a nice departure from some of the more recognized Michael Jackson tracks. That being said, vocally it’s a performance that’s easily forgettable. “I Want You Back” is probably one of the best tracks to come out of this tribute episode but mainly because it’s done by the Warblers. I have no idea why it s that The Warblers manage to get the best music, re-invent well known tracks and put their little Barber shop quartet-like treatment on a track and totally make it great while the main cast seems incapable of doing so. It’s fun, poppy, a bit acapella and the only track that really makes you take pause and get into the music. “I Just Can’t Stop Loving You” is a Finn and Rachel duet. I know. Sigh. It’s kind of predictable–over-the-top mushy, romantic and chop full of emotion and a renewed vowed of love between these two characters.

“Wanna Be Startin’ Something” is another actual good track featuring the characters Blaine and Sebastien. Now, the vocals aren’t anything new or earth shattering but the song’s iconic breakdown is of course what makes, rather than breaks, the song and keeps it all funa and interesting. “Ben” is probably the ‘WTH’ track of the whole episode. I’m sure it will make sense in context of the episode but … really, Ryan Murphy? You have access to Michael Jackson’s catalog and you choose a track like BEN to feature? I’m sure for some it has some emotional ties and all but … no. Just, no. Hearing Kurt do his little high falsetto Sesame Street-like performance of this track is just something I could do without. “Bad” is a number pitting New Directions against the Warblers. Again, I’d expect something amazing from this mash-up of the show’s two dueling groups but the final is product is rather predictable and tame.

Final Verdict
We all know that the music is really half the recipe of Glee and that the actual episode and performance of the numbers can make a rather neutered  song suddenly awesome and memorable. That being said, Glee is all about the music so my main question is why do they not take more chances with the music? The music of “Michael” is rather predictable and as Simon would say in his Idol and X Factor days, it’s all rather karaoke to me. This is the third “tribute” episode the show has done. I remember simply listening to the music from “The Power of Madonna” and the cast seemed more into the music and gave it their all. They even took some big creative liberty with tracks like “What It Feels Like For a Girl” by having the guys sing the tracks or making a mash-up of “Borderline/Open Your Heart.” Skip ahead a year to the “Britney/Brittany” episode. Again, the music alone was enough to sell the episode. Now “Michael” seems tepid, predictable and overall rushed. There are no real mash-ups, there’s no twists to make you gasp, there’s no real Glee imprint on any of the tracks and overall it’s rather disappointing. Here’s to hoping the actual episode turns out better.

Listen To These: “I Want You Back,” “Wanna Be Startin’ Something”