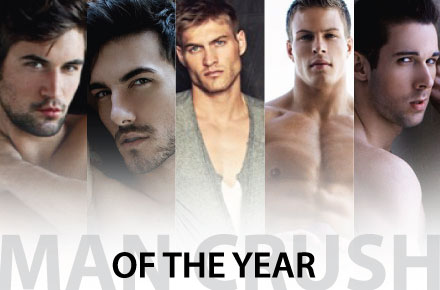 As the year draws to a close, so does a year’s worth of crushing. The Man Crush Blog has had a great year as we’ve all had fun coming here each week to share, and obsess over hot men. So as we prepare for a new year, it’s a great time to look back at some of the most popular men who’ve graced your computer screen this year and have been featured on this blog. Since I’ve chosen the guys over the year, I’m entrusting you guys (and gals, and transgendered others) to choose the most important guy–the coveted Crush of the Year. Here’s five guys selected for round one. Vote for your favorite and he’ll go up with winners of the coming rounds. Voting for round one ends Monday, December 5, 2011 at 11:59 PM EST.

Benjamin Godfre (November 2011) In just one day of being featured on the blog Benjamin racked up almost 2,000 views, making him perhaps of the most popular man crush of the day features in 2011. He’s got a legion of fans who proudly call themselves “Benjaminions” and based on the level of interest he’s drummed up, I predict Bejamin Godfre could be in store for quite a big in year in 2011. [View his original featured post here]

Derek Allen Watson (February 2011) Oh, Derek Allen Watson. Cute, a tad bit oversexualized, hot as hell. Before Derek only one another man drummed up the numbers of hits that his featured post amassed in February. He’s the “It” model that can be seen all over New York City and one of the most popular crushes on The Man Crush Tumblr. His dedicated fan base and admirers have made him a staple on this blog and has everyone waiting to see what he has in store for 2012. [View his original featured post here]

Jacob William Sones (May 2011) While the darker haired men usually get the most views on this blog, Jacob proves that perhaps gentlemen do prefer blonds. He racked up dozens of comments on The Man Crush Blog‘s Facebook page and continues to make hearts flutter whenever his post is spread around. Can he beat out the brunettes and dark haired beauties to become Man Crush of the Year? [View his original featured post here]

Stefan Gatt (August 2011) This Detroit, Michigan hunk wrestled down the competition to become one of August’s top posts. Not only that but in the months since he’s continued to stay in the top 10 viewed posts each month. Is it the muscle? Perhaps the fact that he’s been featured on the cover of DNA magazine? Whatever the case, his well-sculpted body, abs and chiseled features may be enough to make him the champion in this crush of the year competition. [View his original featured post here]

Sebastien Vachon (March 2011) This fresh-faced Canadian model may just be the new kid on the block this year but his pics have driven all the crushes wild. His Rick Day photos were featured on the blog back in March and the views proved that Sebastien has the “It” factor that could very well make him an in-demand male model in the years to come. Is it enough to beat out the other men in round one and earn him the title of Man Crush of the Year for 2011? [View his original featured post here]