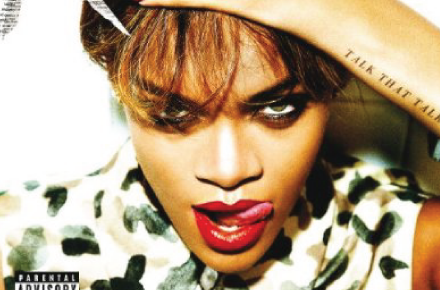 On November 21, 2011 Rihanna is set to release her new album, Talk That Talk. If you’ve heard her chart-topping lead single “We Found Love” then your aware that Rihanna is in the mood for love. Talk That Talk, if it were assigned a theme, it would be to explore all the sides of love and relationships: the good in finding someone new who excites you (“You Da One”) to the relief in finding love when you’d given up all hope (“We Found Love”) to the love that happens behind closed doors (“Birthday Cake”). Here’s a look at the album’s tracks.

Track-by-Track
“You Da One” is the second single and perhaps the album’s strongest track. Produced by Dr. Luke, the man behind hits by everyone from Britney Spears to Katy Perry, the track is bouncy and has Rihanna taking on Bob Marley by singing, “Your love is my love, your love is mine.” What’s interesting about this track is that it features Dr. Luke’s now popularized “dub” breakdown that he inserted into many of Britney’s tracks on her album Femme Fatale which completely makes this track addictive and fun. “Where Have You Been” starts off like a ballad with the lyric, “I’ve been everywhere man, looking for someone; someone who can please me, love me all night long.” It moves on from being a somewhat upbeat country/western influenced track into a full-on club track. If you’re a fan of David Guetta’s usual style of European-influenced synthesized club tracks, you’ll definitely enjoy this track. It’s a bit hard to get into but the bridge and dance focus sells it. “We Found Love” was the first single that many will already be familiar. Again, another club-track that comes with synthesizers and implanted hand-claps, this track is easy to dance to. On this track Rihanna sings in a higher register than she usually do and with the music backing, it works out in her favor and gives the track an overall whimsical, carefree tone. The album moves away slighting from the European-club sound for a more American, urban sound on the track “Talk That Talk.” This track features Jay-Z and I can easily picture this being a single. “You ain’t never had a woman like me, yeah; and you will never have another like me, yeah,” she sings after giving the floor to Jay-Z for half the track. This is Rihanna going more for a harder, flirty sound that we really haven’t heard from her in a while. It’s an upbeat, fun sound that’s not really all that pop but not at all hardcore hip-hop either.

“Cockiness (Love It)” is the track that will probably have people talking. This track is full of sexual innuendos that are probably a good reason for the whole “explicit content, parental advisory” warning on the front cover. “Suck my cockiness, lick my persuasion; eat my words and then swallow your pride down.” Yes, this is Rihanna releasing her inner Madonna circa Erotica period, bypassing all the suggestive lyrics and going straight for something more explicit that will be harder to misinterpret. This lyrics sound like a text description of some of the hot content websites like sexm.xxx (sexm site now). The music is restrained and barely there so that you definitely have the words to focus. The lyrics make reference to love slaves, dominatrixes and the bridge is her repeating, “I love it, I love it, I love it when you eat it.” It’s a dirty song but I have to say that after hearing her sing about love and cheery things, it was a nice departure and the explicit content definitely makes it a fun, perhaps soon-to-be fan favorite. “Birthday Cake” is short but continues the explictness of the previous track. “He wants that cake (repeat), I’m gonna make you my bitch.” It’s more like an interlude than a full-fledged song, and it lacks music so it’s not really anything you’ll be dancing to but it’ll make for a nice stripper/sex anthem.

Rihanna cleans up her act with the track “We All Want Love.” Here, she goes for something a bit more innocent-sounding. “We all want to be someone’s one and only,” she sings among other things after concluding, “We all want the same thing.” It’s a nice track but a hard act to follow after getting so explicit two tracks ago. “Drunk On Love” has a bit more substance and a beat to it, carrying on from the theme of love and how we need it and how we react to it in our lives. “You know I’m drunk on love, drunk on love, nothing can sober me up,” she sings in almost a pleading-voice. “Roc Me Out” is like the title track in that it goes for the urban-sound. The track sounds as if it was pulled straight out of the 1990s yet is reminiscent a bit of her popular track “Rude Boy.” “Give it to me like I need it, you know how make me feel it, roc me out on the floor,” she sings to a more urban-sounding background track. She works best when she’s pushing the envelope and being more sexual, as she is on this track. Maybe the sex workers on websites like hd porn movies could take inspiration from Rihanna’s seductive moves because Rihanna knows how to put on a sexy show.

“Watch N’ Learn” is an odd sounding track. The music itself is very light, bouncy, innocent while the lyrics are suggestive. “Oh baby, baby, just like that; oh baby, baby, just like that; oh baby, baby turn me out.” There’s a disconnect though between the lyrics and the music where something isn’t working or connecting as it should, making it hard to focus on the lyrics so it feels a bit lacking or weak overall when that may not be the case. “Farewell” is a nice, old-school track that sounds a little ’80s. “Farewell, somebody’s gonna miss you; that somebody’s me” is the main lyric and main substance of the track. Since most of the album explores the theme of love and relationships, the track is a fitting end; here Rihanna is saying goodbye to her lover who’s departing and the whole track summarizes their relationship and her hopes for him. It’s not really overly produced and overall it’s sentimental.

Bonus Tracks
“Red Lipstick,” with the cursing and explicit lyrics, immediately reminded me of Rihanna’s Rated R album. “Lemme grab your d*ck while I sit on top,” she sings among other eyebrow-raising things. In a way, the language is distracting and makes the track feel out place. “Do Ya Thang” is very throwback and old-school R&B and is good enough to have made it onto the album as a regular track. It’s upbeat, fun, playful and Rihanna at her best musically. How the track ends acapella is another added goodness on an already strong track. “Fool In Love” has hints of rock with a euro-flair to it. Over guitar riffs and synths, you’d think this was one of Justin Timberlake’s song. While it’s nothing amazing, it’s a nice uptempo ballad to end the deluxe edition. It at least fits into the theme of Talk That Talk which is relationships and being in love, and falling out of love.

Final Verdict
If I had to complain or critique one thing about the album it would be the lyrics. Now, Rihanna has never been known for her lyrical styles and is probably more of a catchphrase or hook-type of artist but the lyrics of this album really seem to be sub par from everything else she’s released so far. It’s of no surprise to me that she was able to churn this album out so quickly considering for her part, there seems to be little of her personal touch on this song and all she’s doing on most of these tracks is singing the hook or bridge on repeat, at times excessively. Another minor critique is how in the album art she’s posing with cigarettes or smoke coming out of her mouth. Uhm, what is this, the 1950s? Perhaps I’m old fashion but most people I know or speak to think smoking is disgusting and yet she’s attempting to glamorize it. It’s a minor critique that doesn’t affect how I feel about the music itself but something worth noting.

Some have called this the modern-day Erotica (for you super young people, that was Madonna’s album that she released soon after penning her popular Sex book). Sorry, this is not Erotica. There are one or two tracks–”Cockiness” and “Birthday Cake”–that come close but the rest of the album is far from the material or style of Erotica to earn that distinction. It is different from most of her albums in that it feels as if she’s sampling a sound from each of her albums; there’s a little bit of the pop vibe of Music of the Sun, there’s a bit of the edge/matured sound from Rated R; there’s the club/dance vibe of Loud so there’s something here for everyone. At the same time, the different sampled sounds gives the album a somewhat disconnected, unfocused feel. It’s ok because most will not buy this album expecting to like every track and will end up keeping the tracks that have the sound and style that appeals to them the most.