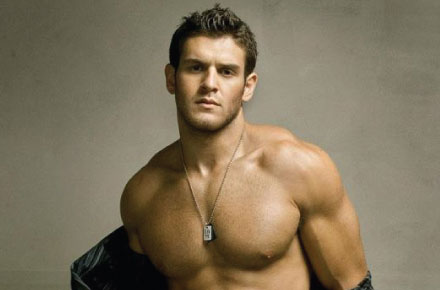 Ladies, gentlemen and transgendered others–this stunning, 6-foot-tall, 200 pound hunk of a man is model Billy Kiraly. He’s another popular model whose photos are all over the Internet but you don’t always see his name and info attached to those popular photos. As I considered the men for an end-of-the-week crush, Billy seemed like the perfect pick. He’s hot; he’s muscular; he totally rocks that dreamy college frat boy vibe (which he should since he’s currently attending Florida Atlantic University): basically, this is the type of guy that’ll definitely have you swooning on into the weekend.

Billy is originally from Boynton Beach, Florida and currently lives in West Palm Beach, Florida. He’s represented by Posche Models and already has been featured in Fantasticsmag where most of today’s pics are from.  He’s been shot by photographers David Vance and Andy Armano and both seem to have an eye for capturing all his sexiness and every single little hot muscle in his body.