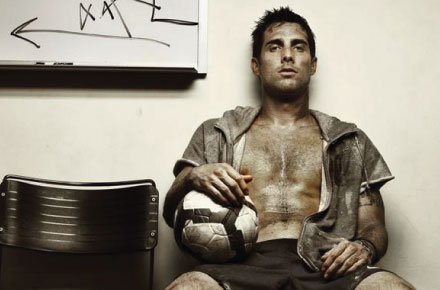 Last week a strayed from my usual Thursday rugby-themed crush and you all did not seem to like that one little bit. So, here’s one to make-up for it, but it’s not a rugby crush, it’s a soccer-themed crush! Oh, I know, not the same sport but hey, both sports involve hot muscular men grunting, getting sweaty and dirty and fumbling with balls. Today’s featured crush is Carlos Bocanegra.

Carlos was the captain of Team USA during 2010’s World Cup tournament (or still is? I’m not sure, I’m really not hetero enough to know). He plays for the French team Stade Rennais regularly as well. If that doesn’t confuse you enough, he’s actually of Mexican heritage which attributes to his drop-dead good looks. Other stats on Carlos include the fact that he graduated from UCLA, he’s 6 feet tall, verse (not sexually, in terms of playing multiple positions on the field!) and overall fine as hell.