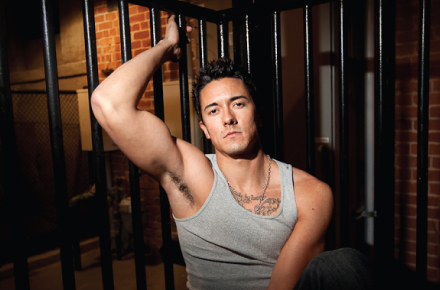 I’ve come to realize that the majority music collection revolves around divas and is really devoid of male singers. When it comes to listening to males, they either have to blow me away vocally or catch my attention with gorgeous good looks. Well, when I stumbled across today’s featured crush I was pleasantly surprised he had a bit of both.

Derek Jameson II is a singer from Los Angeles. He’s been on the music scene in LA since 2006 and has had a couple releases including Biology, Space & Time and his most recent The Invention of Love. His style is rather pop and unlike many in the music scene right now he’s letting his voice do the work for him rather than relying on autotune and other special computer-enhanced effects. In addition to his voice he has his awesome body working for him. The muscles, the tone, the tightness … yes honey, yes. He can some and lip sync on my “mic” anyday (or perhaps I should say any night).

You can follow Derek on Twitter @derekjameson, listen to more of his music on his Myspace page, and check him out on Facebook. Check out his skin-baring music video for his single “Ribcage” below.