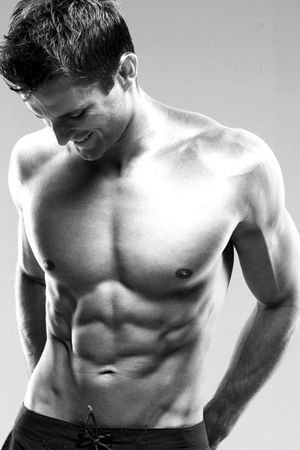 It’s probably the most sought after body feature for gay and straight men alike besides the coveted v-cut: abs. Oh, claim and say what you want but you know you want them. Badly. But like most, you probably have no Earthly how to really go about getting them, do you?

Most guys have no idea that there’s more to getting abs than doing crunches. Then there are others who are wise enough to know that training and building your abs takes a lot more work than doing a few crunches. In part, it’s diet: everyone has abs but most also have a layer of fat covering up those precious commodities. Sugar, salt, processed foods and basically most anything that tastes good can end up sabotaging and keeping your abs from making an appearance. You can also do squats, pushups, yoga and tons of other exercises that’ll eventually lead to abs. But forget that. This post is the bare essential of what you need to know about targeting and building great abs. The tips below will not only build your abs but will help build a stronger and better core. Do these tips recommended by Stuart McGill, Ph.D., author of Ultimate Back Fitness and Performance to uncover your abs in record time:

Best Way to Work Your Obliques: Do rolling planks. Hold a side plank to the right for 10 seconds and then rotate to a normal plank (both hands and/or forearms on floor) and hold for another 10 seconds. Rotate to the left side, completing another side plank for 10 seconds. That’s 1 rep. Do this 6 times total.

Abs Built Quickly: Work your abs together rather than trying to work or target the lower and upper abs separately. This is just common sense. When in real life would you just use your lower abs? Or when would you ever just use your upper abs? Never. You’ll use both together in almost all functions so work them together, suggests McGill.

The Secret Path to a Six-Pack: McGill writes in his book that most people suck in their belly buttons towards their spines. Wrong! The proper technique to activate your ab muscles is to brace them as if you were preparing yourself to be punched in the stomach. Practice that and as you workout, keep that tension and feeling and you’ll work your abs far more.

Crunches are out, pot stirrers in: If you’re looking to do one move that will work your abs the best, then stop looking toward crunches because they won’t do a thing for you. Instead, you need to do a move called “stir the pot.” Get in a pushup position and place your elbows and forearms on a Swiss ball. Move your elbows in a circle while on the ball. The key is to make sure your core/abs don’t rotate.

No Bending or Twisting Required: You’ll encounter a slew of exercises that involve twisting or bending that’ll promise abs as a result from crunches to medicine ball twists. Be wary of these for the sake of your spine. Your abs are built to resist motion so doing twists and bends with the intentions of building a six pack could actually put your spine at risk.

Get Jacked … with Man Crush Fitness