You may recognize Anthony Romero from Twitter or perhaps his hot scenes shot with DominicFord.com. Sure, we’ve already featured him as a part crush (which you can check out here) but today’s he’s showing off a different side to him. Think you know Anthony? Check out what he had to say about how we go about labeling and defining ourselves. The following is a piece written by Anthony in his own words, expressing his personal view. 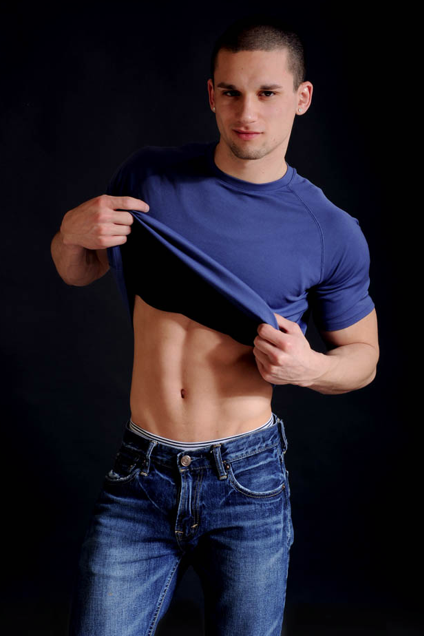 “There is no consensus among scientists about the exact reasons that an individual develops a heterosexual, bisexual, gay, or lesbian orientation. Although much research has examined the possible genetic, hormonal, developmental, social and cultural influences on sexual
orientation, no findings have emerged that permit scientists to conclude that sexual orientation is determined by any particular factor or factors. Many think that nature and nurture both play complex roles.” American Psychological Association.

There is nothing wrong with labeling … if you’re considering only the group who accepts that particular label. (In other words, gay men rarely have a problem being called gay by other gay men); however, if you consider the sociology behind labeling (just Google: social reaction theory) you will find that the origins of most labels begin as ways to separate “us” from “them.” And that’s rarely a pleasant thing.

Take for example the N-word. Once primarily used as a derogatory slur that created a social and psychological schism between “whites” and “blacks,” (or us and them), its connotation and denotation (and pronunciation) was changed over time and can now sort-of be seen as a sort of unifying word rather than a separating word. (To reiterate, gay men rarely have a problem being called gay men by other gay men). [That’s not to say all people are okay with using that word in any variation.]

Originally the term “gay” was used a lot like the N-word—to separate and demean. Much like the N-word, “gay” has since been taken as a word of our own and made to unify and distinguish us as a group; however, the theory behind the label didn’t change! Rather than heterosexual people using the word to separate themselves from homosexuals, the word was claimed by homosexuals as “their” word and inadvertently discriminated against and separated homosexuals from heterosexuals in a social understanding. In layman’s terms: straight people call “deviant” behavior gay to make a social distinction between themselves and the people they find “immoral.” In the 20th century, gay came to be synonymous with homosexual. Homosexuals didn’t think being gay was wrong. Homosexuals accept the word gay but change the connotation of the word. Being gay means you aren’t straight. Thus you separate yourself from straight people based on the label you accepted.

What I’m trying to say is—when you’re running down the street in late June in your underwear, your face painted in seven different colors, singing “Born this way,” just remember—you’re also probably a hundred other labels.

So why is labeling yourself by your sexuality so important? (Not to say we only label based on sexuality. I’m just tackling one variable here). It seems so strange, though. Think of it this way: what if we all labeled ourselves by our favorite color? I’d be a blue person, and it’d probably be strange for me to date an orange person.

Labels are arbitrary. They only have meaning because we give them meaning. And while I whole-heartedly agree that we were in fact “born this way” I just don’t think sexuality should be so important to define so much of us. We often go “label crazy” trying to categorize ourselves and everyone else into the smallest common denominator.

Labeling is a really slippery slope. First there’s gay and straight, then from that gay diverges into gay and lesbian. From that you get top and bottom, fem and butch. From that you get bear, twink, muscle, jock, power-top, power-bottom, dyke, androgynous, pig and one hundred thousand other useless tags that do the very same thing that the N-word did—separated “us” from “them.” The myriad labels we have arbitrarily injected into our lives has probably divided us to the point where the “gay community” (a word here which means anyone who identifies as LGBTQSA (including the other fifteen million letters)) is just a scrambled mess of cliques.

Another topic I was asked to have an opinion about was sex v. sexuality. For this, I think it’s better to quote a friend. He said, “Just because you are a man who has sex with men that does not mean you are gay.” (Fantastic point which also supports the idea of labels I posed in the first
paragraph after the quote. You have to accept a label before you identify with it).

Let’s use senators in this example: In the case of most state senators who are “actively committed to their wives” (yet get caught either soliciting or engaging in sexual behaviors with other men) this holds true. While some male senators (and clergymen) will engage in “sexual
relations” with same-sex partners, they also technically have the choice be gay, because they have the choice to accept the “gay label.”

In that sense, being gay is a choice. Most gay people have impulsive inclinations toward someone of the same sex. That is not a choice. In that aspect you were, for an increasing lack of a better term, “born this way.” But it is a choice to act on those inclinations.

It is a misconception that having engaging in sexual activity with a person of the same sex is what makes a person a homosexual, when in actuality it is a choice to be (labeled) a homosexual, or even a heterosexual for that matter. I mean I’m a homo, and sometimes I’ll be in the gym staring at a really hot ass and think, “God, that’s such a hot ass,” and it turns out it’s a woman. Although I am not (emotionally or really physically), I might find women (or at least their asses) attractive (but I’m still gay).

Just remember, sex is a natural thing and sexuality is fluid. So, to the conservative who can look at a population of committed homosexuals (who have loved each other for decades and just want to get married and have the same rights as “straight” people) and see only second class
citizens, and to that same little gay boy who, this June, will be running around in his skivvies preaching he was “born this way, motherfuckers!”, just chill the fuck out. If you choose to be a part of a social group, whether that group identifies as gay, lesbian, bear, straight, blue, Asian, or Warlock, just let people be.

Labels are manufactured as refrigerator magnets but socially as important as bathing regularly. Still, we shouldn’t use some labels to define us as people, because there are a million labels we could have chosen instead.

I completely and openly accept any questions, comments, concerns or bitch-fits you would like to pose to me. If you managed to read this entire thing, thank you. I love you. [You can follow Anthony on Twitter @AnthyRomero].