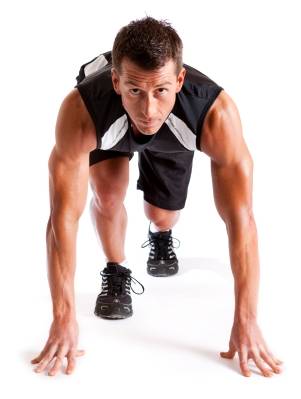 Hopefully you read my earlier post about getting into running as an exercise. If not,  click here before reading this one! To briefly recap, running is like any other exercise. There’s a proper form to running, procedure, technique that if you simply skip over in favor for hitting the pavement without any prep you’re going to crash and burn and hurt yourself. This post is all about getting prepped for the run.

You have two choices: either running can be a chore like brushing your teeth or taking out the trash or it can be the big event of your day and something epic and fun. If you can’t find a way to make running fun, believe me, it’s going to get old and boring very quickly and you’ll be parked right back on the couch watching Oprah or The View instead of hitting the pavement and getting fit. As I wrote about before, the key to running is that it needs to serve a purpose, and the more self-serving and selfish that cause or goal, the better. I mean it. You need to have this goal plastered on your fridge, written down, memorized so that if the thought of flaking out on your run comes to mind, you’ll step up and get to it. Run to slim down, run so that you can walk around wearing shorter skirts, tank tops, no shirts, no clothes at all without feeling self conscious. Or, simply run to get healthier than your chubby, unmotivated friends. Once you’ve figured out why you’re running, the real preparation begins. Here are five tips on how to get the most out of your runs:

1. Figure out where you’re running. There’s nothing worse than running without a plan or path. I hate the idea of running without a plan or running to nowhere. I always recommend choosing paths and routes that a lot of runners in your town or city run. You really don’t want to run somewhere that isn’t on the map or is hard to get to. I like running in well-traveled, visible areas. I don’t like the crowds, but at least if something went wrong, there would be people around. Also, for safety reasons, you’d be better off running in an area frequently traveled by pedestrians so that you aren’t all alone to fend for yourself. Have you learned nothing from watching ‘Friday the 13th’? Take a day or two to ask your friends who run their favorite running routes or paths. Or, as you ride around, take note of where you see other runners. In this situation, it’s definitely best to choose the path frequently traveled and taken by others.

2. The first 30 minutes of your run isn’t at all about running. Huh? Confused? Yes, 30 minutes of your preparation doesn’t really involve running at all. 30 minutes before you head out the door (because I’m a fan of outdoor running more so than treadmills) you need to stop and apply some sunscreen. It takes 3o minutes after applying SPF for it to take effect. So if you put on sunscreen and head outdoors immediately afterward, guess what, you just wasted your time because that sunscreen won’t shield you against anything until it’s set on your skin for 30 minutes. Oh, and just because it’s cloudy or cold outside doesn’t mean you need to skip the sunscreen. Doctors and health sources say that getting 20 minutes of direct sunlight on your legs and body, without sunscreen, can be okay – you’ll get a healthy dose of vitamin D. However, anything more than that (and for those who are fairer skin) really need to always dawn sunscreen and re-apply it after an hour if you’re still outside.

3. Stretch quickly. You need to warm-up your muscles if you want to run at your best. Think of what muscles you’re going to use the most to run: your leg muscles. I really don’t understand why some runners like to stretch their arms and twist and such as if they’re going to run on all fours. You need to stretch your glutes (butt), hamstrings, feet and touch on your core (midsection/abs). Also, you need to do more than static, slow stretching. You’ll see a lot of runners standing in place, pulling the heel of their foot to their butt and standing there like a flamingo for 30 seconds and doing other unenthusiastic, boring, dull stretches. Scratch that, you’re going to really warm-up if you do it dynamically. Do some jump squats which works your lower body and your core (place your feet hip-width apart, your hands behind your head, squat down and push up/jump, repeat). If you have access to a barbell, do some deadlifts. Have hand weights? Do lunges. Do some jumping jacks, butt kicks, high knee kicks. The point is that you want to some stretches and warm-up exercises that get you moving and really warm and wake your muscles up. Static lunges aren’t good because they don’t even come close to mimicking what you’re going to put your body through! So while you’re waiting for that sunscreen to kick in, do some dynamic exercises.

4. Prepare the most awesome, explosive, epic playlist for your iPod or mp3 player. Few runners head out without an iPod or music player of some sort. One of the downfalls of running is that it can get boring, especially if you workout or run alone. So first of all, buy yourself an exercise/arm band that’ll hold your music player. Yes, you can run with the iPod in your hand but that’s going to compromise your form and can lead to injury. Now, sit down and create the best line-up of music your collection has to offer. It needs to be motivating, a soundtrack and playlist fit for a movie. You don’t want to run 30 minutes to slow, sad, depressing songs about how a man’s done you wrong or broken hearts – you want music that has lyrics singing your praises, proclaiming how hot you are, how wonderful you are. Dance music, pop music, remixes, fast-paced music is really going to get you excited and have you running harder. So key up Lady GaGa, Madonna, Britney or whatever your favorite ‘fun’ light music of choice happens to be.

5. Prepare for take-off. You’ve got your plan, you know where you’re running, you’ve done your dynamic stretching so your body is revved up and ready to take on a run. Now what? Well, you take note of the time you’re setting out. As I said, you want to keep track of the time you spent running and eventually when you become a hardcore running, you’ll want to track the miles or your heart rate and other things. For now, the time is all that matters if you’re just beginning. After you’ve noted when you’ve set out, you’re ready to run. By this time, you’re all suited up in your running attire (I talk about proper attire in ‘Get Up Offa That Thing’), you’ve got the ultimate playlist, get going!