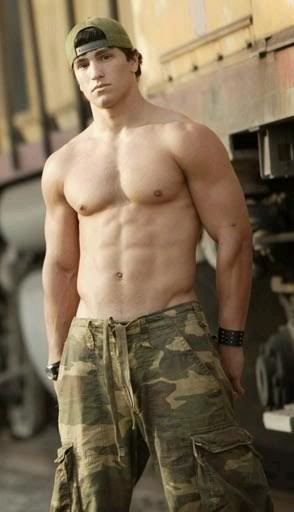 It’s come to my attention that I seem to have a thing for guys who play football and I’m quite all right with that. When a sport can attract guys like Jeremy Bloom to play then hey, I’m a fan. Let’s get real – Jeremy Bloom isn’t on my radar because football career. I came across his photos from his modeling days. You may recognize him from Abercrombie & Fitch ads, Tommy Hilfiger campaigns or you may have seen him in Cosmo and GQ Magazine. He’s also appeared on the covers of various magazines. The dark hair, the muscles, the abs … oh how I wish I could be a football for a day and have this guy throw me a round a bit.

What also makes Jeremy super crush worthy is that a while back he started up the non-profit Jeremy Bloom’s Wish of a Lifetime that helps fulfill the often-times overlooked wishes of senior citizens. Aw, a guy you can take home to mother and grandma. You can follow Jeremy on Twitter @JeremyBloom11.