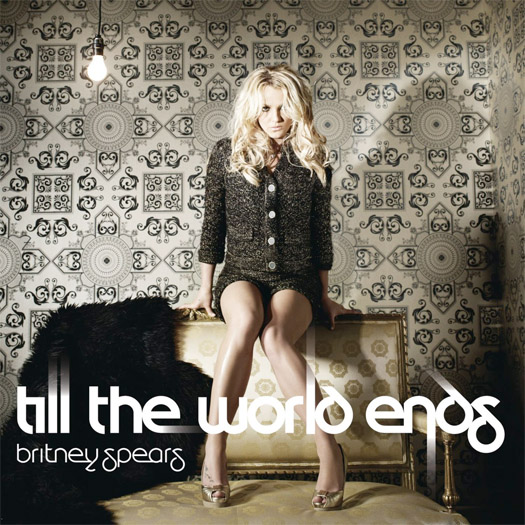 Seems as if Britney Spears and her label have learned from the past. Rather than keeping their cards close to their chest they seem to be in the sharing mood when it comes to Miss Spears’ new material. For the “Hold It Against Me” video they teased us with two weeks worth of clips (that really didn’t reveal much at all when you pieced them together). For the past week Spears and her team have been willingly leaking and sharing short clips of songs from her new album Femme Fatale due out March 29. Then Jive and Spears announced that come March 14th there would be a new single out and guess what? It leaked today.

“Till The World Ends” has an epic title and the song is good, but it’s no “Hold It Against Me.” My first impressions were a bit reserved. The track was written by Ke$ha and Dr. Luke and produced by Max Martin. With that combo, I really expected to have my mind blown. Ke$ha, who’s had some of the biggest pop and party tracks of the past year writing for the Pop Princess (sorry, the title of Queen is still held by Madonna in my books)? This should have been epic, huge, wham-bam-thank-you-ma’am #1 Billboard material. But it’s just ok. It sounds less like Ke$ha and more like an Usher track left over from Raymond vs. Raymond. Lyrically it’s nice to hear Brit-Brit being a bit more confident and boastful. She proclaims the music will be sicker than the remix (because we all know remixes usually trump the original album cuts of most tracks); that she’s “hotter than the A-list” and that the song will be the next one on her hit list; she asks if she can blow your mind tonight; asks to get her on the floor and that she “can’t take no more” before bursting into a chorus of Usher-like “oh-oh-oh!”

That being said, it’s not a bad track. The lyrics are fine while the music itself feels a bit unremarkable, recycled-club hits. I kept waiting for there to be a massive breakdown as there was in “Hold It Against Me” but the track really doesn’t go anywhere. Still, it was smart for Spears to push out another track so soon. First, “Hold It Against Me” isn’t in the top 10; she and Jive are having to deal with Lady GaGa’s mediocrity that is “Born This Way” dominating the charts and music video scene. Let’s also face the reality that in a matter of weeks, her album is due and before it officially drops, it’ll leak and will ruin the official release. “Till The World Ends” isn’t glass-shattering, earth-shaking but it does get us quite excited to see what else Britney Spears has up her sleeve. What I do get from this second single is that Britney Spears feels as if she’s moving into a more adult-orientated realm of pop. I liked Circus, loved Blackout, but the tracks on those felt as if they were aimed toward a teenage (queer) audience. Her new music feels different and dare I say very un-Britney like but I’m liking the change. You can listen to the full track here.