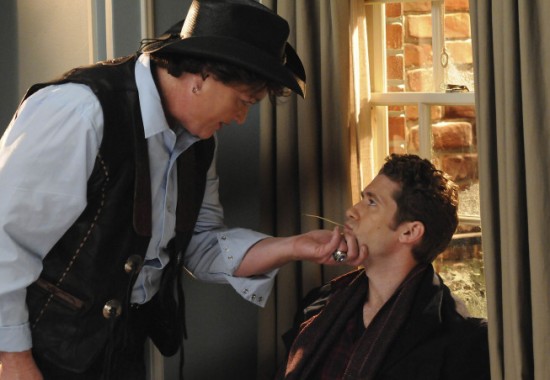 “You know Ella, I think Will should really concentrate on his treatment before he tries another relationship with a hominid, even a human female.” — Sue Slyvester

Mercedes” “Tell them I’ll go if they’ll go.”
Artie: “Tell them yourself. I ain’t no pony express.”
Mercedes: “You’re going, right?
Santana: “Only if there’s liquor. Because a Rachel Berry party is not something I can do sober.”
Brittany: “But it’s alcohol awareness week.”
Santana: “Precisely and I’m aware of how much fun alcohol is.”

“You know what – remember I own that guppy mouth now.” — Santana before Sam kissed Brittany

“I’ve been dry heaving all weekend. When my mother asked what the sound was I told her I was practicing bird calls.” — Santana

“And I’m doing you a favor by telling you that Blaine is the first in a long line of conflicted men that you will date who will later turn out to be only flaming homosexuals.” — Kurt to Rachel

“Everyone drink responsibly.” — Brittany to the school after their disastrous performance of Ke$ha’s “Tik Tok”

“You’re one to talk. How about you crack a Four Loco Count Boozy von Drunkyton.” — Brittany to Will Schuester

“Being thrown up on just does something to a person.” — Rachel

“But if you don’t drink, what will you have to live for?” — Santana