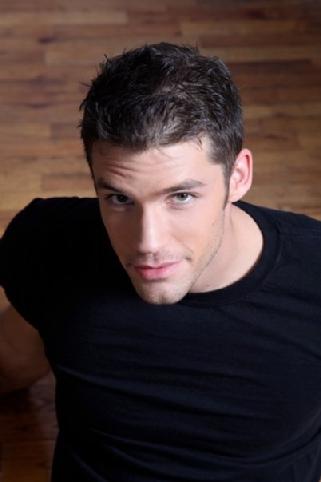 I remember flipping through the channels one summer afternoon in 2009 and coming across the muscled hunk on the ABC soap One Life to Live. It was a scene that looked like it was straight out of a late night Cinemax movie. There was innocent Langston walking by a window and she looks outside to catch Ford, played by the super hunky David A. Gregory, showering and washing himself off outside. The scene showed the water flowing down his massive pecs, streaming down his rippling abs and showed him just totally oblivious to the fact that he was being eye f*cked by a goo-goo eyed Langston. From then on I’ve been an avid viewer of this soap and fan of David Gregory who just seems larger than life with his Spartan-like muscles and body.

You’ll probably be surprised to know that David has a slight connection to Levi Johnson and Sarah Palin – he’s from Alaska! Born in 1985, he grew up knowing he wanted to be an actor and considers Jerry Lewis as a childhood idol. He went to college, graduated but went seven months with no work until he landed the role of Robert Ford on One Life to Live. Seriously, once you see this guy shirtless you’ll be a soap fan too because you’ll probably be taking many cold showers to get over the heat wave that’ll hit you. Check out hot pics of David below.