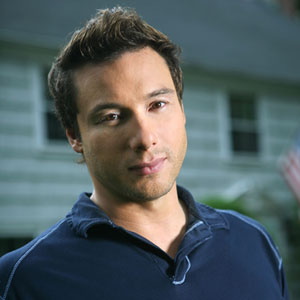 Who else is still trying to lose all that holiday weight? (raises hand) In my quest to find my way back to abs and to get fit enough to participate in shirtless running that will commence in the Spring, I’ve turned to one of my favorite chefs – Rocco DiSpirito. I’ve said it once and I’ll say it again – there’s nothing sexier than a guy who knows how to cook. Last year he wrote a great cookbook titled Now Eat This, a collection of recipes of comfort food and stuff you really want to eat that’s all under 350 calories. I love you, Rocco. With the help of his book I’ve been able to actually enjoy some good food while slowly getting my pre-holiday body back. And not only are the recipes and food great but the pictures of him in the cookbook … wooh, they certainly get my oven fired up.

Rocco DiSpirito is known for his Italian-American cooking. In 2003-2004 he was the subject of a reality show (The Restaurant) that followed him and his mother during the opening of one of his restaurants. Seriously, doesn’t that sound like every gay man’s fantasy? He also was a participant in season 7 of Dancing with the Stars. You’ve probably seen him guest on various shows including Rachel Ray, The Doctors, The Biggest Loser and Dr. Oz talking about healthy cooking. That’s the great thing about Rocco – he went from being a bit chubby to studly by completely changing how he eats. Now he’s all buff, muscular and has us all wanting to see what he’s got cooking under his clothes. You can follow him on Twitter @roccodispirito and check out his website. Be on the lookout for his new book Now Eat This! Diet: Lose Up To 10 Pounds in 2 weeks Eating 6 Meals a Day out on March 22 of this year.

Video of the Week: Ricky Martin Bares All