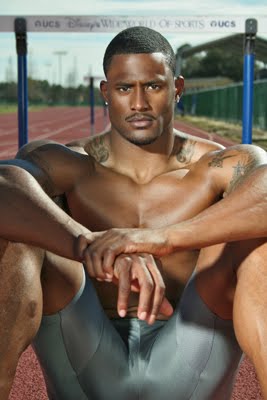 Being a bit of a short guy, taller guys really intrigue me. I’m also a fan of running so when I came across a photo of David Oliver a few weeks ago I felt like I’d just come across the best of both worlds. I mean, seriously, look at this man! He’s really the definition of “tall, dark and handsome” and a whole lot of other sexy adjectives. Since he’s not a football or basketball player, it’s likely you may not have heard of him so here’s a nice little introduction to this hot athlete.

He won bronze at the 2008 Beijing Olympics in the 110 meter hurdles category. He also is a record holder in terms of America for the same category. Born in 1982, he climbed to fan during his college days at Howard University. While in college he also played football for Howard but his main area of expertise was definitely track and field. He continued running and jumping hurdles professionally after college and continues to compete while adding more awards to his already impressive collection. That being said, let’s get real. This man is gorgeous. His long muscular legs, those abs, the everything. I wish he’d jump straight into my bed and then we can jump a few hurdles on our own. You can follow David Oliver on Twitter @doliversub13 and check out his blog.