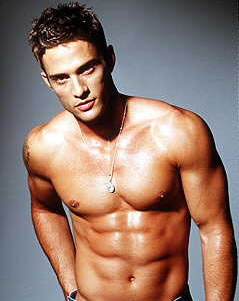 I remember the first episode of One Life to Live that I really watched from start to finish. Like most gay males, watching this soap sort of came out of the time I spent bonding with my mother. It wasn’t until I was a bit older (and mind you that I’m just 26 right now so I’m not ancient) that I started to really get into the show. One of the reasons? David Fuermo. He plays Cristian Vega, a former bad boy now turned local artist who teaches at one of the local universities in the show. The best part of his role? He’s usually either shirtless or working out and flexing his muscles. Either way, it’s a win for the viewers.

Similar to past featured crush Jordi Vilasuso, David was born in Cuba (Havana to be more exact) and later raised in Miami. He later joined the U.S. Marine Corps and then switched careers and became a model. He studied at the International Actors Studio in Paris and his first big role was playing the beach stud that Mariah Carey frolicked around with in the video for “Honey” back in the 1990s. He’s been a permanent fixture on ABC’s One Life to Live since 1998 and like wine, only seems to get better with age. You can take a look at his skin-baring moments below in the pictures.

Michael J. Fox goes ‘Back to the Future’ for Scream