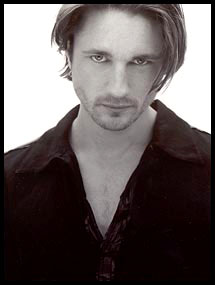 At this point you’ve probably seen the promo commercial for ABC’s new medical drama (as if they need another) Off the Map. While I’m a bit through and over the whole medical-backdrop motif, I have to admit that the only reason I’d tune in is for a guy. If there’s one thing you can count on from a Shonda Rhimes-produced show is that it’ll be stocked with beautiful men to distract you from the fact that the plot’s either ridiculous or recycled from her other shows.

Martin Henderson is the big male lead in Off the Map where he’ll plays Ben Keeton. You may recognize him from the 2005 film Bride & Prejudice or the Kate Blanchette film Little Fish. Beyond that, he was in the commercial for the 2008 Cadillac CTS and appeared in Britney Spears’ music video for “Toxic”. Like most hot males trying to make it in Hollywood, he’s done his share of modeling and thank goodness he’s now on a show that has a chance of being successful because he looks great shirtless. You probably detect a slight accent from him – he’s from New Zealand. Swoon! Tune into the season premiere of Off the Map Wednesday at 10pm EST on ABC.