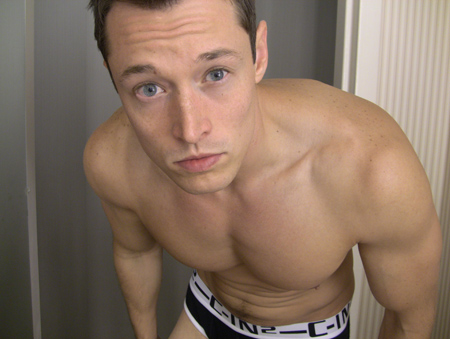 Over the past year since starting the whole man crush posts, I’ve featured all sorts of guys – celebrities, musicians, athletes, porn stars so here’s a new genre to add to the list: blogger. Blogger, you ask with an arched eyebrow. Yes. You probably don’t think about the people behind some of the Internet’s most popular blogs as being all that “crush” worthy. For the most part bloggers have a bad rep and are often thought of as shady figures who rarely see the light of day and are holed up in their tiny dark apartments surrounded by cats with untamed hair and nails and posters of the Jonas Brothers or Miley Cyrus plastered on the walls. Yet, there are some really hot bloggers and one in particular that is beyond crush worthy: Davey Wavey.

If you drop by Davey Wavey’s blog Break the Illusion, you’ll be treated to a smorgasbord of information and posts covering everything from health and fitness tips to Davey’s personal opinions and advice on how to improve yourself and the life you live. He’s a bit of a YouTube sensation with his many vlogs that usually feature him shirtless (he said he’s allergic to shirts, thank you God for that one). He has a huge online presence that includes a huge Twitter following, over 30,000 Facebook fans and tons of videos on YouTube. If you’re into adorable, guy next door types with hot bods who parade around shirtless and in their underwear all the time then you need to get hip to Davey Wavey. A sample of his vlogging as well as pics (he models occasionally) are below.

Matt Gutman: Legend In the Making