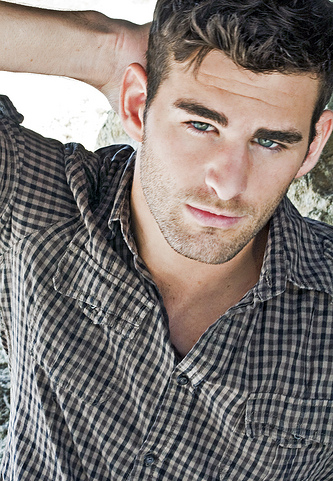 SO, the other day I came across this totally NSFW, must be over 18 years of age, image and that sparked my interest in looking into the guy behind this pic. Turns out it’s a pseudo-celebrity that I follow on Twitter, Chris Salvatore. He’s an actor and singer who’s put out a few music releases with a few tracks you more than likely haven’t heard of and has appeared in movies like Eating Out: All You Can Eat.

Of course, I like Chris not so much for the music or the role of Zack in Eating Out but more so for his looks. He has that rugged college-guy kinda look and it is kinda hot that he’s into music. If you’ve checked out my past man crush features you’d know I have a thing for guys who can sing and have the dark hair, blue eyes kind of look. Plus, Chris is actually one of the few openly gay musicians out there which definitely makes him crush worthy. If you want to check out his music you can check out his Myspace profile; he also has a Facebook fan page you can join and you can follow him on Twitter @csalvatore. Or by-pass all of that and go over to his official homepage. In the meanwhile, here’s a nice little montage that gives you plenty of reasons to add Chris Salvatore to your watch list.

The Internet Has Matt Gutman Fever!