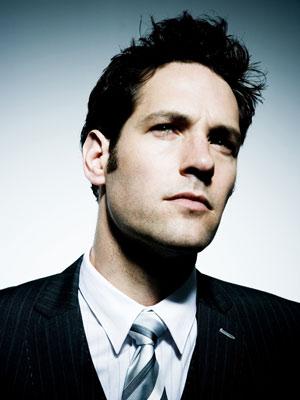 Many of you may have tuned into Saturday Night Live tonight to catch Paul Rudd. While (as usual) the show wasn’t that funny, Paul Rudd still makes it some must-see-tv. I grew hip to Paul via the ’90s classic Clueless where he played Cher’s (Alicia Silverstone) hot stepbrother. Ever since I’ve had a thing for him and feel he’s definitely my type – dark hair, attractive eyes, fit, funny, isn’t afraid to make fun of himself and sports quite a hairy chest most of the time.

For those few who’ve been living in caves and are unaware of the great hotness that is Paul Rudd, let me give you a brief schooling. In addition to Clueless he’s been in films including Forgetting Sarah Marshall, Role Models, Anchorman, 40 Year-Old Virgin, Knocked Up, and Wet Hot American Summer. He was also briefly on Friends, playing the role of Phoebe’s boyfriend who later married her. Over the years he’s become a big comedy star and a fixture in movies produced by Judd Apatow. He has a new movie coming out titled How Do You Know which also features Reese Witherspoon and Owen Wilson. He’s married and has a kid, which makes him a total DILF. Beyond those facts, he’s just amazingly hot and funny and a guy you’d want to spend all day playing around with in every way, shape or form.