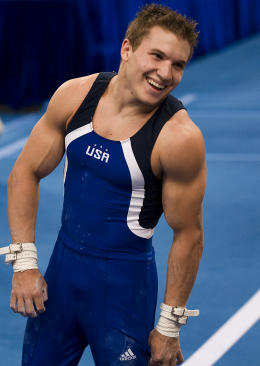 The other day I featured German gymnast Philipp Boy so today I’m taking it back to the states and drawing some attention to Jonathan Horton. This buff gymnastic beast is from Houston, Texas and was born in 1985. He attended the University of Oklahoma. He’s won tons of titles and is probably familiar from his impressive performance at the 2008 Olympics in Beijing.

He’s married but that really doesn’t make him any less attractive. Look at those muscles! That smile! He has the “guy next door” charm to him and those form-fitting outfits that leave little to the imagination definitely makes him stand out from the crowd. You can read more about him (and see additional pics) at his official website. For now, check out these pics of him below and try to keep yourself from imploding from his hotness.

Time to Make You Sweat: Running With a Busy Schedule