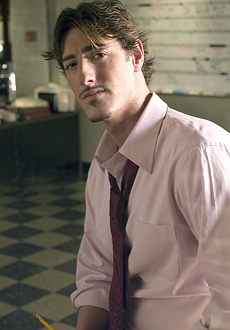 When I saw the teaser for the upcoming movie Skyline, I really didn’t pay much attention until I realized the wonderful, muscled, hunky Eric Balfour was one of the stars of it. Eric’s been around for quite a while and you may recognize him from shows like Kids Incorporated, Six Feet Under, 24, Conviction and films like the recent remake of Texas Chainsaw Massacre. What I like most about him is that this is one male actor who doesn’t shy away from showing off his body. Thank goodness! His body is rocking and unlike many of our male celeb crushes, he’s willing to show off his body and even go full frontal (we won’t show any of those shots but Google it and see what pops up).

Eric Balfour is a California native who has French, Russian and Native American ancestry that has combined to make what could honestly be considered the perfect male specimen. Check him out on Twitter and check out all of these hot pics of him below.

Standing Ovation- Praise for Some of Entertainment’s Leading Ladies

‘Desperate Housewives’ Season 6: A Look Back