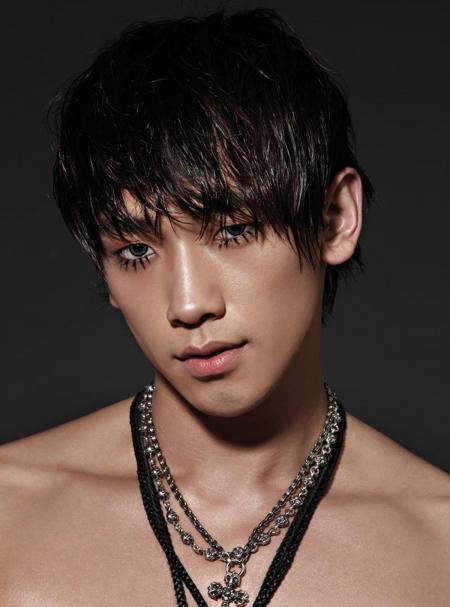 A couple of days ago over on our Twitter (if you’re not following us, you should be! @man_crush) we asked our loyal legion of followers who they’d like to see featured on our humble little blog and our crushee @_Micker_ quickly responded with his suggestion of Korean R&B star Rain (Bi). We’ll be honest – we’d never heard of him, but once we looked into him he seemed like a perfect feature. The abs, the sexy little dance moves, the jaw-dropping good looks. Bingo! We’re all over him now and wish he was all over us as well. Rain, born Jeong Ji-Hoon, may not be played much (if at all) on American radio but his impact on the entertainment industry shouldn’t be overlooked. Time magazine named him the second most influential entertainer in 2006. He’s been called the Asian version of Usher and Justin Timberlake and you’ll get why if you see his bump ‘n grind dance routine.

In case you’re wondering, his stage name is the English word Rain – in Korean, Rain is Bi so you’ll often see him referred to as either of those if not both. Rain started off as a backup dancer for Korean star Park Ji Yoon; in 2002 he released a song titled “Bad Guy” and starred in the drama “Sangdoo, Let’s Go to School”. As his fame began to increase he released a second album “Ways to Avoid the Sun” and starred in the 2004 drama “Full House” (sorry, no Uncle Jesses or Michelles were involved). He’s gone on to win awards for both his acting and his music, tours, and has captured the hearts, minds and other body parts of fans all over the world. Basically, he’s really a triple threat and everything Justin Timberlake strives to be. The only difference is that Rain apparently can act in addition to sing and dance where as Timberlake is really only good at one or two of those things (and acting isn’t one of them!). So, many of you have now been properly introduced to the phenomenon known as (Bi) Rain. Check out the little skin-clad montage below to see why our followers urged us to feature him on the blog.

Michael J. Fox goes ‘Back to the Future’ for Scream