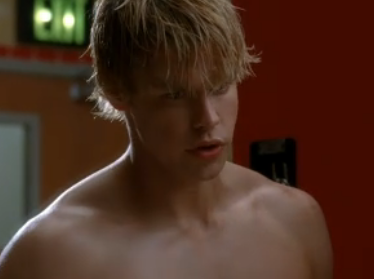 Chord Overstreet is probably one of the best additions to the cast this season besides Coach Beiste. Overstreet plays Sam Evans, a newbie at the school who’s on the revamped football team. In a way, he’s a protege to Finn but then again he feels like Finn 2.0 – better looking, a bit more talented, smarter.  We caught a glimpse of Chord shirtless during the first episode of the season (if you missed that glorious event you can check it out here) and with his second big appearance on the show (though he did appear briefly in last week’s ‘Grilled Cheesus’ episode) he had yet another shower scene, another shirtless locker room moment and a workout scene toward the end. Here are pictures of Chord’s latest glee-worthy shirtless hotness from last night’s episode “Duets”-

“Tell me what you don’t like about yourself.” – Thanks for...