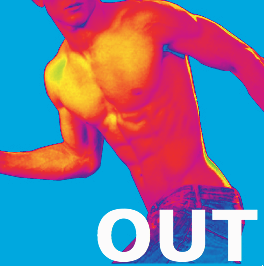 If you’re a frequent visitor to the blog, you know the usual focus is on the frivolous things of life – the latest from the realm of pop music, the ridiculously offensive but true statements Sue Sylvester makes on ‘Glee’ each week, the objectification of male celebrities. Well, every now and then we need to click off our tv, pause the iPod and pen a post about something meaningful and of substance. There’s a big campaign going on right now that was started by Dan Savage that you may or may not have heard of: It Gets Better. Out and proud people are stepping up (finally) to reach out to youth and young adults who seem to be giving up the battle as they let others convince them that they are lesser beings for being gay. Our society has really failed in terms of equality and tolerance. I’ve said it, and it’s true. We like to think that as time marches forward that we’ve evolved and we’re above and beyond hate, prejudice, intolerance and all those bad emotions and actions humans are capable of exhibiting. We’re not, people are imperfect and often they have to engage in hate and making someone feel bad or suffer just to take their own minds and focus off of what’s wrong in their own lives.

There’s nothing wrong with being gay. There’s nothing wrong with being lesbian, bisexual, transgendered or questioning. It’s okay to be skinny and chiseled or fat and curvy. What is wrong is living your life by other people’s standards and ideas of what’s right. You need to figure out who you are and rock it to the fullest. You’ve probably been confronted with a billion different pieces of advice and handed pamphlets instructing you how to live your life if you’re different. You don’t need them or other people to tell you how to live your life. The hardest part of coming out or realizing you’re not exactly “like the others” isn’t so much the process itself but realizing you’re about to shatter the perception and ideas others have of you. That’s cool, because you should be concerned with focusing on you and what’s going to make you happy rather than how you can please others. You’ll never live up to other people’s standards and plans for you – you can however set and meet your own goals.

I’m not going to bore you with my coming out story. I’ll say this – each year does get better as I learn that life isn’t so much about what’s going on around you but is all about what’s happening within. There was a point in life when I felt defeated and low. My happiness depended on factors beyond my control and how others perceived me. At some point, I realized that I didn’t have any idea of who I was, what I was capable of and that really I’d spent my entire life worrying about others. That’s not a good life and it’s not living – and many younger people or those just accepting who they are probably are facing similar feelings. It’s a heavy, depressing, tiring feeling and pushes you to the brink of total collapse. Don’t go that path. Worry about you and get to know yourself. It will sound selfish and conceited but it’s your life and you need to be worried about pleasing you and living up to your own standards.

Now, to the friends and parents of gay, lesbian, bisexual, transgendered and all the in betweens: accept these people as they are and stop feeling let down by them not meeting your expectations. They need your support, not your judgment. Yes, it may feel weird to see them go down a path you’d not have chosen for them but life is all about exploring and living and that’s what they’re doing. It’s not about religion or a question of wrong or right. Though it may make you uncomfortable or worry you to see these people set off on a journey that doesn’t involve you, still, don’t worry. Be there to greet them and support them when they make their way back to you. We have to stop spreading messages of hate and intolerance. Children, tweens, teens and young adults shouldn’t be going around feeling that it’s okay to ridicule anyone because he or she is viewed as different.

It gets better. For everyone involved. I’ve come to realize that really, anything of worth in life comes with a test, trial and usually puts you through heck before you get the reward in the end. Endure, persevere and eventually you’ll find whatever it is you’re looking for in life and out of life. There are going to be a lot of people interested in seeing you fail and fall by the wayside: it’s way more funner and pleasing to prove them wrong and to hang in there so that you can show them that you’re much stronger than they ever realized. IT GETS BETTER.