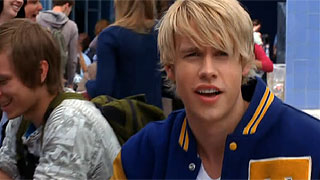 If you caught the season 2 premiere of ‘Glee’, you got an eye-full of one of it’s newest cast members, Chord Overstreet. Rumors had been swirling around since the summer that Chord was going be playing Kurt’s (played by Chris Colfer) new love interest. Apparently, that was just a rumor because producers seem to have other plans for his character Sam Evans. Still, Chord Overstreet adds some much needed male eye candy to the cast. Perhaps it’s his blond hair or maybe it’s that ridiculously huge mouth, luscious pink lips or the muscles and pecs but whatever the case, Chord Overstreet’s Sam definitely had me hitting a few high notes as I squeal in glee at his shirtless shower singing and witty reply to Puck’s question of how many tennis balls could he fit in his huge mouth. “I’ve never had any balls in my mouth … have you?” Priceless, as was Finn’s expression at the exchange.

There’s not really much on Chord Overstreet bio wise. He does have a Twitter account that you can follow @chordoverstreet. For now, marvel at the hotness of this star with caps from his first appearance on ‘Glee’.