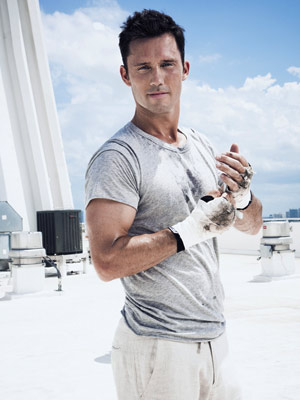 Yesterday was the first official day of summer and what better way to mark the occasion than recognizing one of television’s most sizzling, hottest, under-the-radar stars? Jeffrey Donovan plays Michael Westen, a government spy who finds himself dismissed after receiving a ‘burn notice’. Well … I have to admit I’ve only caught a few clips of the show. Yet, Jeffrey Donovan has been on my radar for a while now. He’s appeared on various shows promoting ‘Burn Notice’ and appeared in Men’s Fitness to talk about his workout routine. I have to say his body, in my opinion at least, is pretty smokin’. It’s not overly developed but he has a pretty tight, somewhat muscular body. His character seems to be known for his immaculate taste in clothing and well-put together wardrobe. I saw him on The View this morning and he definitely seemed to send Sherri Shepherd into a tizzy over his cute and handsome features. Prepare to burn up over this crush: