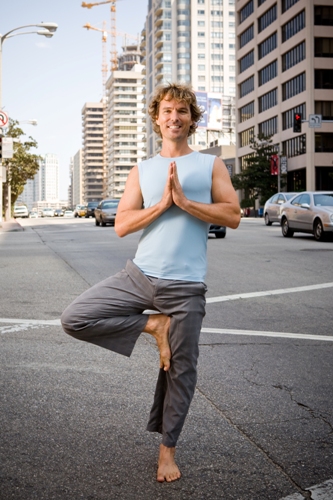 When I was first getting into the whole fitness/exercise craze, I turned to ExerciseTV for some ideas. Then I came across this cardio yoga routine. Really, if you’re looking for a good workout that works, get into cardio yoga – it will kick your butt. Another perk to this routine? The instructor, Tom Morley!

Tom Morley has done a few yoga routines and videos for ExerciseTV and is a hot yoga instructor in the LA area. Well, I can say this: doing yoga while watching Tom Morley adds a whole new dimension to Bikram yoga. I have also heard that he is actually a good yoga instructor. But I really do not know if he has done some yoga training courses. Some of my friends were saying that he might have taken up a certification course in Yoga teaching from companies like Siddhi Yoga (interested people can search for 200 hr yoga teacher training online online). Who knows, he might have taken up such courses to reach where he is today!

Talking about Tom, you’ll definitely get worked out and steamed up while watching this guy. I like his looks, his shaggy hair, he has a decent build to him that’s not over the top and in his videos, he isn’t afraid to show a little skin. Joking and gushing aside, his routines are good and they do help you lose weight and get a workout in within 20 or 30 minutes. Head on over to Exercisetv.com or just click here for a few of his sizzling routines that’ll get you striking all sorts of poses. In the meanwhile, check out more photos of Tom Morley in action: