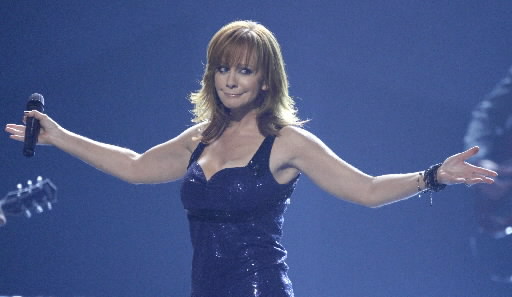 I run with Reba McEntire. Not literally (though how awesome would that be?) but I have 199 of Reba McEntire’s songs programmed into my iPod and even though I have Amadaeus (That’s my iPod, and yes, I named it) on shuffle, there’s a good chance a Reba McEntire song will be playing during one of my runs. I’m always curious as to what other runners I encounter are listening to. I often times run near a college campus but unless it’s spring or summer, I usually encounter an older crowd while I’m out. So I wonder what that old granny is listening to – is she playing into my preconceived stereotypes I have in mind for her by listening to old Doris Day or old songs from the Lawrence Welk show … or is she rocking out to Good Charlotte and Lil’ Wayne?

What runners listen to while they’re sweating and hitting the pavement is always something I’m interested in. I know what I listen to would probably surprise a lot of runners. Me, I’m a short, black/African-American male in my mid 20s so I’m sure many passersby probably think I’m listening to rap or something. In fact, that’s probably the last thing I’m listening to. When I run, I often listen to Britney Spears, Dolly Parton, Reba McEntire, Madonna and whatever else is on my iPod. I have a lot of pop music on my iPod and then a selection of popular country music (the Dolly and Reba). I also have some music from soundtracks that include ‘Little Shop of Horrors’, ‘Young Frankenstein’, ‘Glee’, ‘Enchanted’ … just to name a few. Yes, so while someone may be running around with the typical Lil’ Wayne, Jay-Z and Eminem (or whoever is ‘in’ right now, I don’t keep track of that side of the music genre), there I am running around to Dolly Parton singing ‘Daddy Was An Old Time Preacher Man’ or Reba’s ‘Climb That Mountain High’. I like pop, I like variety, I like my female singers and music artists … what can I say? I’m from the South and I’m definitely a queer little fellow.

It’d be nearly impossible for me to come up with the ultimate workout playlist but some of my favorite songs to run to are:

This is just of course a partial list. What do you listen to while you run or workout?