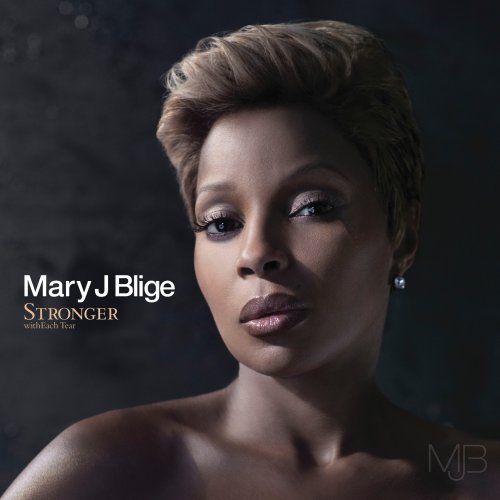 I’m on the fence with Mary J Blige’s new album. I came in quite biased; I love Mary J Blige. Her angsty, melodramatic, heart wrenching music really vibes and clicks with me. Remember what Jenna said on a recent episode of ’30 Rock’? “Drama is like gay man Gatorade, it replenishes their electrolytes.” Perhaps it’s like that movie ‘Precious’; critics considered it an uplifting movie even though it is one of the most depressing things you’ll ever see because it reminds you that your life could suck even more than it does. So, Blige just has a way of taking drama and heartache and turning it into some good music. Yet, something’s happened with the past few albums – she’s been getting noticeably happier. She’s no longer singing about ‘no more drama’. Instead, she’s moved on to singing about … dare I say it … being happy and secure! What’s happened to our dear Mary?

Well, ‘Stronger With Each Tear’ isn’t horrible. I think it’s pretty good, but it’s not Blige’s best. Even though she’s been working on this album for what feels like an eternity, there’s something simply ‘off’ about it all. It’s taken me almost a dozen listens to feel like this album has any sort of direction or cohesiveness to it. Already, my review posted for Amazon has split the fans. I am not surprised. When I went to post it I saw, to my shock, that this was all of a sudden a five-star album! No reviews lesser than 5 stars. Hmm, did I pick up the wrong album? I posted my review anyway and gave the good and bad:

The Good: After two albums that felt somewhat similar style and sequencing wise, ‘Stronger With Each Tear’ feels like Blige’s move in a new direction musically. There aren’t as many ballads or deep, depressing tracks and instead, she seems more bent on finding her groove with hip-hop and dance tracks like “The One”, featuring Blige’s voice manipulated by auto-tune and a dancefloor-ready beat accompanied by hand-claps and an appearance by rapper Drake. A piano and string-backed “Hood Love” is catchy and soothing and has Blige singing of love and devotion rather than her usual theme of heartbreak and angst. “I Am” is this album’s version of “Be Without You”; it’s very mainstream, hip-hop but pop at the same time and (in my opinion) is Blige at her absolute best musically and vocal wise on the album. Blige also takes a few chances, deviating from her usual musical path by including a track that is rather fun with silly lyrics but again, features a more confident Blige who’s giving a warning to a woman coming after her man. “Each Tear” may have a title that screams of ballad and makes you think of Blige’s emotional singing but it’s a stark turnaround; instead, it’s an uplifting, inspiring song about learning from your heart ache. There’s a wide range of music and styles featured on ‘Stronger With Each Tear’, probably the first album from Blige in a while where she’s sticking to a theme but allows the music to vary and evolve for each track rather than fit into a specific sound and style for the entire album.

The Bad: What brings the album down is that no track really rises to the level of Blige’s biggest hits or her vocal abilities. In some ways, this album felt a bit tame and reserved. I kept waiting for her to let go and really dive into a song with heart, soul and raw emotion as she did with “No More Drama”, “We Ride”, “As” or even the last album’s “What Love Is.” She doesn’t really have a track like that on the album, though “In the Morning” and “I Can See In Color” come somewhat close. Some of the tracks are decent, but they seem a bit beneath her after all she’s accomplished musically in the past few years. The collaborations seem a bit much; you have Trey Songz, T.I. and Drake somewhat taking over some of the songs they’re featured on. It’s fine, but unlike the past albums, this one is shorter so it felt as if the listener is being cheated out of a real Mary J Blige experience. There are more than a few tracks that just seem okay or average and felt like filler or skip-worthy after one listen including “I Love U”, “Said And Done” and “Tonight.” It took a few listens for me to pick up on the theme of the music and lyrics but the album sounds as if it was somewhat rushed for the sake of getting it out before the holiday season.

Some comments I’ve received thus far: S. Martin wrote, “Excellent review, I agree. As I write this I am listening to MJB’s album “My Life”…You Gotta Believe. I absolutely love Mary but I feel her 90’s albums are where its at. So much emotion and soul in many of her songs, often times pain. But I am a Mary’s fan for life so I will add Stronger with each tear to the collection.” Another Amazon.com customer that goes by the name of windmuse felt my review was way off and later commented, “Pull in the claws, kitty, there are no professional reviews on this forum. Poor Antoine, let the guy speak for himself. Chill, kitty, and please have the people at the home assist you on use of spell checker in addition to the thesaurus.” I think I had more fun reading the user comments than writing the review!

What do you think? Is ‘Stronger With Each Tear’ one of Blige’s best or is it just an album rushed and pushed out in time for Christmas to make it debut high on the charts since the singles have had a rather lackluster reception thus far? Read my full Amazon.com review here.